[This post contains spoilers for Season 7 Episode 2 The Walking Dead: The Well]

Well, this was a much-needed episode to follow last week’s brutal (and ultimately unsatisfying) season premiere.

Why was this episode so good?

First of all, three words: 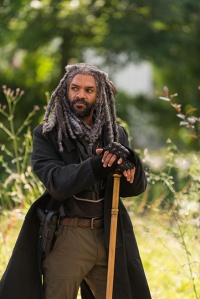 But not just this awesome new character played phenomenally by Khary Payton.

We also got one of my favorite sorts of TWD episodes, the quiet ones.

The Walking Dead is never better than when it pulls in and focuses on one or two characters. Some of the best episodes of the series have been ones which featured Carol or Morgan prominently, and this week’s gave us both.

Since I bitched about last week’s episode and how it should’ve been the Season 6 finale, rather than Season 7 premiere, it’s only fair that I give the show props for the things it still does well.

And tonight’s episode was a perfect example of what TWD does when it trusts its audience and doesn’t try to appeal to the “Gotta have more action!” contingent, giving us quiet, charming, and oftentimes funny episode.

The Well opened with Carol and Morgan following the end of last season, when they were rescued from certain death by a group of unknown soldiers. We then cut to a few days later with Carol coming to in a bed with Morgan by her side, telling her that they’ve been taken in by a community called The Kingdom.

The place is a perfect little sanctuary in this world gone to rot, a thriving community with happy people, protection from outside threats, food aplenty, and even a freaking choir! Book your vacation now!

Morgan brings Carol to meet The Kingdom’s leader, an over-the-top man calling himself King Ezekiel. Not only does he speak like someone role-playing at a Ren-faire, but he’s also got …

a GIANT FREAKING TIGER on a chain! (They’re GRRRREAT!)

Ezekiel even refers to her as a “fair maiden.”

Carol’s expression as she attempts not to laugh was absolutely priceless!

And, Carol being Carol, immediately goes into her passive, “aw-shucks, me?” dumb rube persona, trying not to let on that she’s actually a hardened killing machine who is onto any scheme you think you’ll run on her.

THIS is another thing The Walking Dead does well — it uses your knowledge of these characters you’ve come to know and love to create some truly funny and memorable scenes. Seeing Carol play these people is awesome, because we know she’s nothing at all like they think she is.

So, Carol, still suffering from all the shit that went down last season, tells Morgan that she doesn’t want to stay. She thinks the place is a joke, and these people are living in a fairy tale, not at all prepared for the brutal realities of this world. She doesn’t know where she’ll go, but she needs to leave.

He tries to talk sense into her, but hey, it’s Carol. She’s already made up her mind, and it’s not exactly like these two ever got along.

Meanwhile, Morgan finds himself becoming a mentor to a naive teenager who is in desperate need of some fighting skills, which harkens back to Morgan’s whole back-story and how he was transformed by the man who was holding him prisoner (but not really a prisoner). This is a storyline that seems like it might give Morgan a bit of a purpose, which he was seriously lacking after losing his wife and son and then having Alexandria go from peaceful to KILL KILL KILL in the blink of an eye.

Of course, this being TWD, I don’t expect this kid to last long. But maybe give Morgan a bit of happiness for a while? Pretty please?

Now, if you’re thinking TWD suddenly turned into a sitcom, make no mistake, the dark brooding undercurrent was still evident.

The constant threat reared its head when Ezekiel, crew, and Morgan met some men in town,

That’s when we learned that The Kingdom isn’t exactly this perfect sanctuary free from threat. In fact, Ezekiel and his crew are also beholden to Negan’s Saviors, having to provide them a weekly bounty to stay safe.

This sets up a very interesting dynamic that I’m looking forward to seeing play out this season. How long will Ezekiel play ball with Negan’s abusive thugs?

Shit is going to hit the fan.

And I’m hoping this time that the payoff won’t be robbed by a splintered cliffhanger that robs the storyline of tension or the emotional gut punch TWD is usually so good at delivering.

The end of the episode saw King Ezekiel catch Carol about to leave. He decided to lay his cards on his table and reveal who he actually is, and that was one of the best moments of the episode, a heartfelt moment where he reveals that he is NOT some deluded nut thinking he’s a king. He’s just a zookeeper who took on a role that people needed him to play — a fearless leader who will protect them.

When Carol questioned why he’d fooled the people, he explained that people are a lot more productive when they’re not fearing for their lives, when they’ve got hope.

This is something that TWD has explored in several different ways over the seasons, how best to lead people.

We’ve had many explorations of different leadership styles in this series from the early days of Rick’s idealism versus Shane’s pragmatism to later encounters with The Governor, Alexandria’s Deanna Monroe, Negan, and now Ezekiel.

And it’s in this gray area between right and wrong and what’s best for individuals versus what’s best for the community that I think TWD can provide some thought-provoking discussion.

Yeah, Rick is often seen as the “good guy” leader, but his attack on Negan’s people last season really makes you wonder if he’s not more like The Governor in some ways — willing to kill any threat, perceived or real.

I love a show that isn’t afraid to hold up a mirror to even its heroes.

After a weak and brutal Season 7 opener, I think tonight’s second episode did everything it needed to do:

In other words, The Walking Dead has reminded me why I love the show so much. When it’s on its game, and is confident in its storytelling and characters, it is like no other show on television.

So, what did you think of The Well?

One thought on “What The Walking Dead Got RIGHT”